The roots of CU Anschutz’ health science programs stretch back to the School of Medicine opening in Old Main at the University of Colorado in Boulder in 1883, with the College of Nursing following 15 years later in 1898, and the Skaggs School of Pharmacy in 1913.

Meanwhile, the current site of the CU Anschutz Medical Campus in Aurora was known as General Hospital 21, founded as a military hospital by the U.S. Army during the First World War to treat soldiers suffering from tuberculosis and other lung diseases. It was renamed to honor Lieutenant William Thomas Fitzsimons, the first US Army officer killed in World War I.

To continue providing help in treating tuberculosis and other medical conditions on a larger scale, a new main hospital building was constructed. The hospital was dedicated on December 3, 1941, and following the outbreak of the Second World War, as one of the largest and most modern military hospitals in the country, the Fitzsimons campus played a key role in caring for sick and wounded soldiers during the war.

The Fitzsimons campus has even provided care to the Commander in Chief. In 1955, President Dwight D. Eisenhower recovered from a heart attack at Fitzsimons. As his health improved, he often went to the large eighth-floor sundeck of where he used binoculars to observe the mountains.

As the Fitzsimons hospital continued to care for members of the armed services through the second half of the 20th century, CU health programs broke new ground, with the School of Nursing launching the first nurse practitioner program in the country in 1965, and the School of Dentistry opening in 1973, joining the University’s other health science programs at the University of Colorado Health Sciences Center in Denver.

These new programs built upon a decades-rich history of health sciences breakthroughs and discoveries at the University of Colorado Health Sciences Center, which included innovative research done to improve child welfare, pioneering work on open heart surgeries, critical advancements in public health policy, and the first ever liver transplant. 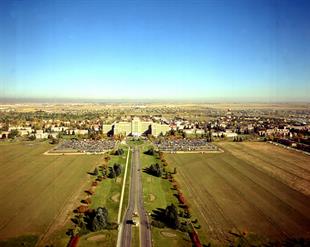 Growth, Base Closure, and a New Vision

By the late 1990s, however, the sustained success and growth at the University of Colorado Health Sciences Center ran into space limitations as the city of Denver had grown around the campus. A new home would be needed to continue to provide new transformative health discoveries for Colorado and the world.

At the same time, the Fitzsimons army campus was slated for closure by the military, as many of its functions had moved to Fort Sam Houston in Texas.

Noting the historical importance of a major health center in Colorado and envisioning the promise and potential of centralizing and connecting health education, care, and research on a single campus, local, state, and university leaders worked together with the goal of transforming the historic military medical center in Aurora into an innovative health sciences community by moving the University of Colorado Health Sciences Center and its schools and colleges to the land.

Two years later, the academic and research operations of all CU health sciences schools and colleges relocated to the new campus on the former army base grounds. This move also included the founding of a brand new School of Public Health for the state; founded as a collaborative venture between the University of Colorado, Colorado State University and the University of Northern Colorado. UCHealth University of Colorado Hospital also joined in the move to the Anschutz Medical Campus, along with Children’s Hospital Colorado, to realize the vision of a fully integrated health sciences campus.

As the CU Anschutz Medical Campus has evolved and grown, so has the city and region we call home. Colorado’s third largest city, Aurora is home to a budding arts scene, hundreds of ethnically diverse restaurants, and recreational opportunities ranging from boating to hiking. And with the Rocky Mountains a short drive away, there is no better location to be inspired by your surroundings than Colorado.